There I was on a cold Sunday morning at Nusenda Community Stadium, getting ready to broadcast The Youth American Football League peewee Super Bowl, when I ran into this week’s Dreamstyle/Enchantment Sports Metro Player of the Week: Jimmy Gallegos.

Maybe it shouldn’t have surprised me that the player of the week, coming off a three-touchdown performance against the Cleveland Storm, was taking in some Y.A.F.L. because according to Gallegos,  “that’s how it all starts. If they look up to us at a young age, they will want to be there one day.”

Gallegos remembers fondly his Y.A.F.L. days when Brandon Madrid of Rio Grande and later Volcano Vista was among a group of seniors that would serve Thanksgiving lunch to Gallegos and his teammates at Tierra Antigua Elementary School. “The seniors sitting with us eating lunch was the coolest thing ever, I can’t wait to do that this year.”

“I remember Brandon because he did have one arm,” Gallegos said, “and I couldn’t imagine the struggle and obstacles he would have had to overcome to play football.”

Gallegos remembers Madrid fondly because he was an amputee. Succeeding on the football field with one arm really inspired Gallegos. 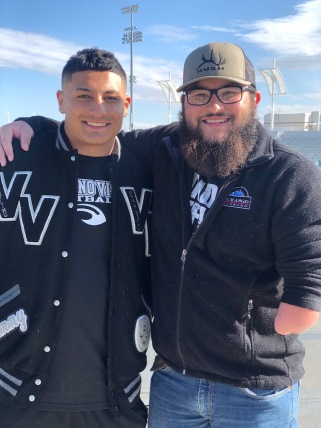 Madden-like numbers for the kid that says he loves and dominates every video game except Madden.

Gallegos and crew are more primed than ever to hoist the championship trophy at the end of the year.

“Our intensity has stayed the same from day one,” he said. We are more disciplined.”

How is this year’s team different than Hawks’ teams of the past?

“We aren’t worried about the future,” Gallegos said. “Today, we are just looking forward to a good practice.”

Gallegos and his team seem to be as focused on practice and the process as ever before.

“We are all in for the program.  We aren’t here for the individual,” Gallegos proclaimed.

Leadership has improved as well, according to Gallegos.  He proudly states that this group is very coachable.

“There isn’t anyone pulling us down,” he said. “I think we could run a whole practice by ourselves; we are all bought in.”

Lastly, I asked Gallegos about him and teammate Issac Chavez being labeled “thunder and lightning.”

He said he loves it. After a short pause, I asked if he was old enough to remember “thunder and lightning?”

He admitted, “No, I don’t even know what that means.”

It means Gallegos and Chavez are having one hell of a year, with the championship in sight.

Sebastian Noel is a play-by-play announcer for ProView Networks, and also is host of “Local Focus with Sebastian Noel,” airing weeknights at 10 p.m., on ProView. Noel, also serves as the on-field reporter during the My50TV game of the week during the football season.