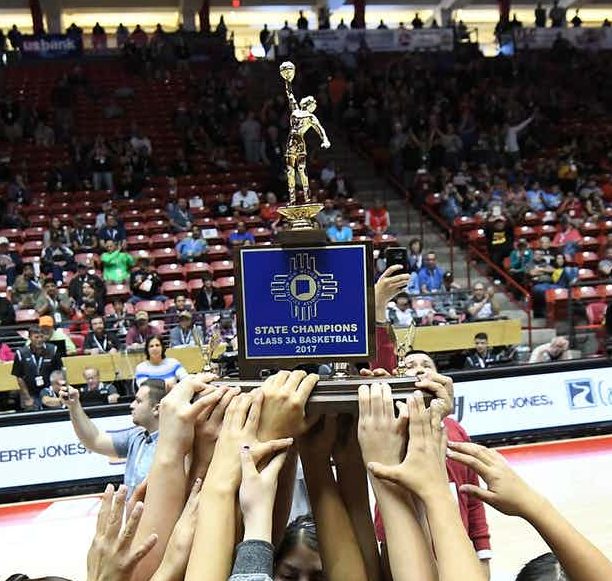 By Russell Gurule
For Enchantment Sports

There’s only one of two ways you can go.

One way is joy and elation at the chance to be called State Champions. The other way is summed up best by my father, “It’s all over but the crying”.

But crying can be good for the soul as several teams will begin preparing for next season. Thursday was about four teams playing for Saturday.

Silver vs. Valley: After basketball fans all came down from Valley’s big upset of Hope. It was time to find out if they’re for real. That question was answered early. Valley jump out to a quick lead and held off a late charging run by the Colts of Silver for an impressive 53-50 victory which puts the Vikings in the big game on Saturday. Valley’s Derick Chavez lead the way with 19 points.

Los Lunas vs. Del Norte: The upstart Del Norte Knights came down to earth as they were hit by a train. All aboard the Los Lunas express. Knight fans had early hope as Del Norte came out strong. However, the conductor of the Los Lunas express, and one of the best players in the state Zanen Zeller went to work, finishing the evening with 24 points leading the Tigers to a 77-60 victory. Los Lunas will now face Valley in the 4A title game on Saturday. Del Norte’s David Flores had 16 points.

Volcano Vista vs Santa Fe: Starting the evening, most fans felt the 5A championship game was going to be the Unser Road rivalry between Cleveland and Volcano Vista… The Demons of Santa Fe had didn’t receive that script; and had plans of their own. Volcano Vista held the lead many times, yet they just couldn’t cast out the Demons. Clutch free throws and excellent shooting from behind the arc by Santa Fe gave the Demons grounded Volcano Vista with a nail biting 55-52 victory. Cruz Martinez led Santa Fe with 10 points. Volcano Vista’s Cesar Madrid had a fantastic game finishing with 16 points and 14 rebounds.

Atrisco Heritage vs. Cleveland: With Santa Fe taking out the first team of the Unser Road rivalry it was time for perennial power Cleveland to take Dreamstyle Arena by storm. This game had all the feeling of a state championship game, and it was only the semifinals. Each possession was a treasured commodity, and there was plenty of exciting plays as Cleveland’s Aamer Mohammad and Atrisco’s wizard Joziah Ramos went head to head.

A back and forth affair as both squads exchanged leads from buzzer to buzzer. Joziah Ramos hit a floater with seconds left to tie the game. Cleveland’s Aamer Mohammad had an opportunity with a straight on three that just missed; sending the game into overtime. The Jaguars of Atrisco calmed the Storm in overtime. And it was two late free throw daggers by Joziah Ramos to give Atrisco a 62-59 victory. Cleveland’s Aamer Mohammed finished with 21 points. Atrisco’s Joziah Ramos finished with 28 points.

The road to DreamStyle Arena has been paved. The 5A match up pits defending champion Atrisco looking to repeat as state champions. And the underdogs from the Santa Fe will be looking to complete the dream and magical run through the tournament without it’s best player J.B. White.

4A like the 5A has the Los Lunas Tigers and superstar Zanen Zeller will be trying to win their first ever basketball state trophy, and the Valley Vikings will be looking for a happy ending to a surprise run that has all New Mexico high school basketball fans talking.

The final fork in the road is this Saturday in The Pit! Atrisco, Santa Fe, Los Lunas, Valley, and EnchantmentSports.com will be there to see who hoists The Blue Trophy.