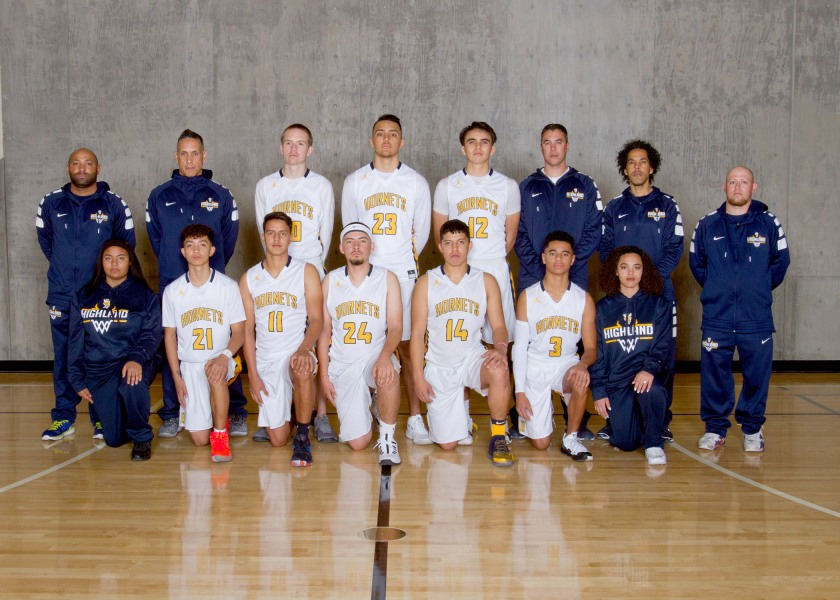 There is a transformation taking place at Highland High School.
Make that two, actually.
The gymnasium is undergoing a long-overdue renovation, complete with new locker rooms, a new auxiliary gym and a new weight facility.
Walking down the corridors, the building is well-lit, complete with photos of Highland athletes of the past. The renovation is 65 percent complete, according to Highland athletic director, John Barnhill.
“Everyone that comes in is really happy for Highland and the history of the gym. I think they got it right by not knocking it down, the history of the gym was worth preserving,” said Barnhill.
The transformation is also taking place on the court; the Highland boys basketball team has the community buzzing with excitement. After going 3-25 in his first year as Highland coach last season, Justin Woody now has his Hornets at 13-8 on the year with a district record of 4-3.
They play at Valley (10-11, 4-3) tonight. The Hornets, Vikings and Del Norte (11-10, 4-3) all share second place behind Hope (15-8, 6-1) in district.
Highland finishes the regular season at Del Norte and at Bernalillo (14-8, 3-4) next week.
Highland has only one senior, guard Ramon Limas, and has balanced scoring led by junior guard Erasmo Carreon, who averages 17 points per game. Junior forward Raul Marquez averages 15 points per game, Limas is at 12 points per game and junior forward Josh Barraza is at 10 points per game.
Marquez, Carreon, Limas and freshman center Jose Murillo all live together with a guardian. The three (not Murillo) played last year at a charter school (SAQH) and when that school closed, they found themselves at Highland. The four speak limited English but are “quick learners” according to Woody. Carreon and Marquez were decorated players in Chihuahua, Mexico, said Woody.
“It is a completely different team from last year; we got our two returners from the previous program to buy in,” Woody said.
Barraza and junior guard Tommy Huynh had played under former HHS coach Danny Brown and felt that they should be the leaders of the team, said Woody.
“We went to a tournament in Colorado in June, and everything changed there,” Woody said. “The team bonded by doing ‘teenage’ things together, and we beat Gallup in pool play and found out that good things happen when we play together.
“From June of last year, until November, we had no gym. We knew it was going to be a grind,” Woody continued. “We put them through some rigorous team-building activities to get us through. From August to November, we did not touch a basketball. It was sprints, working with medicine balls, lifting each other on our shoulders, anything to build trust within ourselves.”
Murillo is 6-foot-7 and raw, but Woody has seen the potential.
“Jose has seen a lot of JV action, and he can make the 12-to-15 footers. He is still getting used to game speed at the varsity level,” said Woody.
The young Hornets play a special brand of team basketball that is rare and refreshing to see. Their starting five are among the best in the city.
“If our offense is good, our defense is better,” said Woody.
Highland, long known for its cultural diversity,  is blending all of these personalities together, along with some language barriers. It takes a special person to lead that. Woody, a coach-of-the-year candidate, is well respected for what he has accomplished and how he has gone about it.
“Coach Woody tells me, ‘I’ll be a nice guy. You may not like it, but we are not only trying to build good basketball players, but good people as well,’ ” said Barnhill.
Woody moved to Albuquerque from Virginia at 18, worked at Southwest Airlines, then decided to go to UNM at 28. He was an assistant with Ray Rodriguez at Cibola for two years, then Eric Orwell at Manzano before landing the Highland Job in 2017.
“If we can increase our numbers in the program, we’ll be a lot better off,” Woody said. “Our kids are so proud of the renovation and are excited about Highland basketball. They can’t wait to play in home games, with a brand new facility, it may entice kids to come here.”

The renovation of the gymnasium is more than half finished, but for Justin Woody, his work has just begun.

Ed Nuñez is a play-by-play announcer for ProView Networks and a staff writer with Enchantment Sports. If you have information, tips or questions for Ed, please send to EnchantmentsportsNM@gmail.com.