December 16, 2018 Enchantment Sports Lobo basketball, UNM sports, Weir's Wolves Leave a comment
FEATURE PHOTO: Makuach Maluach dunks on his way to 22 points in the Lobos’ win against Central Arkansas on Dec. 16. UNM’s Carlton Bragg, right, played for the first time for the Lobos and had 16 points (Courtesy of GoLobos.com).

ALBUQUERQUE, N.M. — Sophomore Makuach Maluach scored a season-high 22 points while redshirt-junior Carlton Bragg tallied 16 in his first game on the floor as a Lobo to power UNM to an 82-70 victory over the visiting Central Arkansas Bears inside Dreamstyle Arena – The Pit on Sunday afternoon (Dec 16).

An announced crowd of more than 10,000 fans roared at the 14:58 mark of the first half when Bragg touched the court for the first time in a year and a half coming off of sitting as an NCAA Division I transfer. Bragg scored just four points in the first half as he was getting acclimated to competition, but finished with a career-high 16 points and seven rebounds (he posted 15 points twice while at Kansas).

“When (Carlton) made his first two free throws right out of the gate, I felt good,” head coach Paul Weir said of Bragg’s performance. “I felt like he’s not too excited… he calmly stepped up, made two free throws. That first layup or two, I think he was a little off, but as the game went on, he was able to turn and finish around the rim. I thought he did a pretty good job tonight.”

Maluach completed his breakout afternoon with his 22 points on four threes and 8-for-11 from the field along with a career-high seven rebounds. Junior Kareem Ezzeddine also had a standout day finishing just one rebound short of his first double-double of the season with 10 points and nine rebounds marking just the second time this season he has scored in double digits.

Freshman Drue Drinnon notched season-best numbers with seven assists and four rebounds while collecting a pair of steals. He also leads UNM with 24 assists on the season.

Four Lobos scored in double figures including Maluach, Bragg, Ezzeddine and senior Anthony Mathis who posted 13 including four 3-pointers on the night for his seventh double-digit game of the season.

“I think that it was (Makuach’s) best breakout game of the year, and not just because he made some threes,” Weir said. “It was the best offensive rebounding game and he had some energy to him … That was really encouraging to see him come forward.”

The Lobos got out to a seven-point lead in the first six minutes, 13-6, before the Bears went on an 11-4 run to tie it at 17-17 with just less than 10 minutes on the clock. The score differential remained under five for the remainder of the half until Mathis hit a three at the 2:13 mark to make it a five-point game, 35-30.

A Bear dunk followed by a pair of Mathis free throws and a layup from junior Corey Manigault made it a six-point lead for UNM, 38-32, which was extended to eight at the half after Bragg’s first bucket as a Lobo with 13 seconds left, 40-32. Manigault also posted eight rebounds on the night.

The Lobos forced a trio of turnovers in the final five minutes of the half en route to the break and forced nine on the night. UNM outshot the Bears 43.3 – 37.8 percent in the first half and held UCA to 16.7 percent from behind the arc (2-12). The Lobos were 6-for-16 from three in the first 20 minutes.

Bragg picked up where he left off in the second half with his second layup of the game just 14 seconds into the frame for UNM’s first double-digit lead of the day, 42-32. UNM went on an 11-3 run with 15:39 left that included back-to-back threes from Maluach and redshirt-sophomore Keith McGee and was capped by another layup from Bragg, 61-47 Lobos. 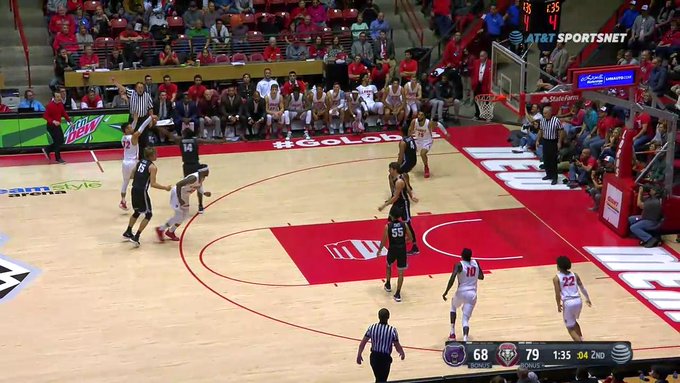 The rebound and drunk from Maluach puts the Lobos up 81-68 with 1:28 left to go in the game! #GoLobos

After the final media timeout of the game with the Lobos leading by nine, Central Arkansas cut the Lobo lead to six on a three from UCA’s Eddy Kayouloud before UNM closed on a 10-4 run that included back-to-back Mathis threes and a Maluach dunk.

UNM is set to return to action in just two days as the Lobos take on North Texas (10-1) on Tuesday night in Dreamstyle Arena – The Pit at 7 p.m.