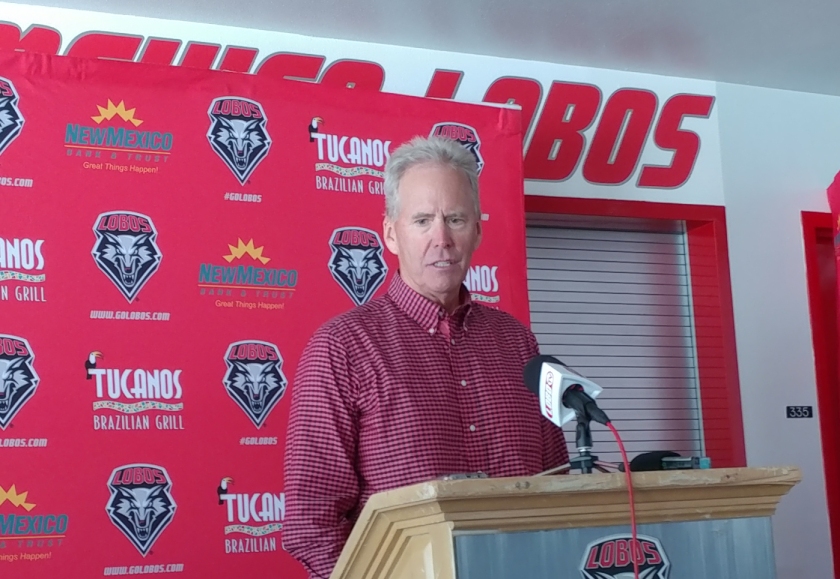 Coach Bob Davie insisted Tuesday that he remains the most qualified candidate to turn around the University of New Mexico football team’s fortunes but also emphasized that his employer shares in the burden of rebuilding the program.

Davie’s Lobos (3-7, 1-6 Mountain West) have one last chance to try to rid themselves of the losing aura that has permeated the team the last six weeks when it plays host to Wyoming (5-6, 3-4) Saturday afternoon at Dreamstyle Stadium.

UNM is hoping to avoid back-to-back 3-9 seasons and seven-game losing streaks to finish each season. Davie hasn’t had consecutive nine-loss seasons since his first two years at the school in 2012.

As he previewed the Lobos’ season finale against the Cowboys, Davie again was asked whether the program could achieve a winning season in 2019 and whether he was the coach that could return the school to prominence.

“I do think that expectations are directly proportional to the commitment and support of the program,” Davie said during his final weekly news conference of 2018. “At some point, somebody probably has to decide — have I (Davie) done more with less or have we done less with more? That’s the reality of that.

“As far as me, absolutely, I plan on being back here next year, and absolutely, I think I’m the best guy for the job. But in this profession, the coach isn’t always the No. 1 voter. There’s other people that have to vote. So I get the big picture of it. The big picture is a lot of dynamics.”

Davie has a 33-53 mark as he completes his seventh year at UNM. He took the Lobos to back-to-back bowl games in 2015-2016, culminating with a 9-4 campaign and a New Mexico Bowl victory in the latter season.

It was only the second bowl victory for the school since 1961.

Expectations for 2017 were high, and UNM started the season 3-2. But the team uncharacteristically had trouble running the football in the triple-option, and it lost its seven remaining games.

Despite the previous success in the triple-option — the Lobos led the nation in rushing in 2016 — Davie decided to move away from the offense in favor of a more conventional, up-tempo spread-option offense.

New Mexico again started the season 3-2, but had an ugly home loss to Liberty. The progress of the spread-option stopped with a pair of injuries to starting quarterback Tevaka Tuioti.

He suffered a concussion in week two at Wisconsin and missed the next game. Tuioti returned in week four vs. Liberty but broke the clavicle on his throwing shoulder on a quarterback run.

Junior QB Sheriron Jones has shown flashes of effectiveness in Tuioti’s place but also has missed a lot of reads, according to Davie, and thrown 12 interceptions.

UNM also is in danger of averaging less than 17,000 fans per game, figures which take season tickets into account — and that number is over-inflated as to how many people actually attend the games, which is much closer to half that 17,000 figure.

Davie has said he will contemplate what the Lobos need to do schematically in the offseason to compete. He acknowledged that running a basic-scheme defense isn’t working because UNM can’t recruit enough talent to run it effectively on a consistent basis.

New Mexico is 114th in scoring defense at 36.6 points per game allowed and 119th in total defense at 479 yards per game given up,

He remains committed to the spread-option with the hopes that Tuioti can stay healthy next season and excel in offensive coordinator Calvin Magee’s scheme that should have more familiarity for the unit in year two with the system in 2019.

But Davie reiterated that the bigger picture for UNM is a discussion for several UNM athletics administrators, including him, that will require multiple offseason meetings.

His message remains that if the school wants to compete for MW championships, it has to find a way to garner more support — in finances as well as attendance.

If UNM isn’t willing to invest more, then it shouldn’t fret over the win-loss record.

“Obviously, we were 3-9 last year. We’re 3-8 this year. You do have to win,” Davie said. “But I go back to the broader sense, the broader question or the bigger question — the elephant in the room — is what are the expectations, based on the commitment and the support for the program?

Are we doing more with less, quite honestly, even though we’re 3-9 and 3-8? Certainly, I have my opinion, but that’s somebody else’s opinion.”

DAVIE INTERVIEW DECORUM RESURFACES: Clearly, Davie has established that he isn’t shy about showing his disdain for questions he doesn’t like from the media.

The debate continues as to whether Davie is obligated to show any decorum during interviews. Some message boarders believe that the head coach is afforded certain freedoms — especially in the heat of the moment — about how to handle certain questions.

Others believe that someone who is the highest-paid employee in the state of New Mexico and who is the top spokesman for the program should be able to keep his disdain and/or frustration in check and show respect for the question and to the questioner.

James commented that he thought the Lobos played a good first half, minus the turnovers and asked Davie how he felt about his team coming out in the second half.

“Well, what did you just ask me?” Davie replied.

“Well, I just want to know, Coach, how you feel about this offense and defense’s play in the first half, and … what you think we’ll be able to do coming out in the second half against this Boise State team?” Ned said.

After about a three-second pause, Davie said, “What’s the question (another, shorter pause … ) how we’re doing on offense and defense, and how we’re going to do in the second half?”

Davie: “We’re going to come out and play hard in the second half.”

Admittedly, the original question might’ve been a little vague, but it’s coming from UNM’s flagship radio station. As a former media member — as Davie keeps reminding anyone who’ll listen — he should know that all James wanted was some comment on what the Lobos did or didn’t do in the first half and then how they might improve upon their play in the second half.

For Davie to mock the question, it might be within his rights, but it makes him look arrogant and condescending, makes his flagship station seem incompetent and creates an unnecessary public moment out what should be a routine interview.