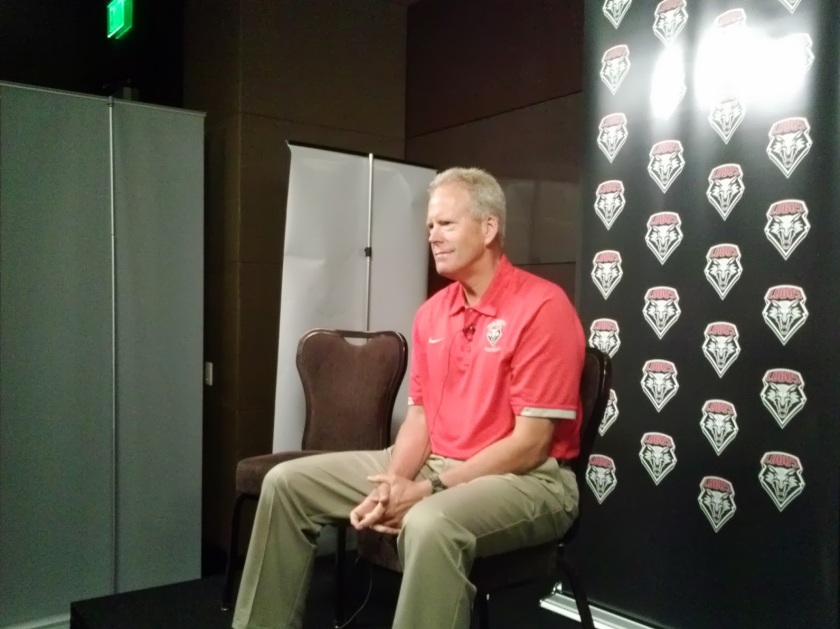 The highs and lows of college football are what attract University of New Mexico football coach Bob Davie to his craft.

Davie’s Lobos are embarking on their 2018 season opener Saturday against Football Championship Subdivision foe Incarnate Word, trying to pick up the pieces of a thoroughly disappointing 2017 and equally tumultuous offseason.

Davie embraces the task at hand.

“It’s an exciting time, UNM’s seventh-year head coach said of the upcoming opener. “All of us are looking forward to getting some answers. There’s a lot of questions. (Media) keep asking questions; we have a lot of questions. Bottom line is you don’t get those answers until you put that football down on Saturday night and then each and every week. It’s time to go find out who we are and what we are — what we can do and what we can’t do.”

Among the questions pertaining to the football program are:

Can the team erase the frustration of a 2017 season that finished with a 3-9 record and a seven-game losing streak?

Can sophomore quarterback Tevaka Tuioti and the offense embrace the spread-option scheme that new offensive coordinator Calvin Magee has installed?

Will Jay Griffin IV and Delane Hart-Johnson finally get a chance to live up to their potential as wide receivers?

Will the Lobos’ offense still be successful despite moving away from their unique identity of a triple option to a more conventional spread option that opposing defenses see on a regular basis?

Can the UNM defense force more than one turnover per game to change in-game momentum more often (the Lobos have forced 26 turnovers in their last 25 games)?

Can return specialist Elijah Lilly and UNM’s special teams match the contributions the unit has made since 2015 to assist the program’s return to respectability?

And will Davie’s offseason suspension and the athletic department’s offseason financial and Title IX woes have any effect on the team?

“It was an incredible story to get to where we were (in 2016 when UNM went 9-4 and won the New Mexico Bowl), Davie said. “We won seven of eight and then won our first game last year, so we had won eight of our last nine, then had a 3-2 record and beat two 10-win teams (from 2016). And then, the air went out of the balloon.

“In some ways, you get more excited as you go. Having to fix some things schematically, making a coaching change, you feel a tremendous sense of urgency. I feel like we’re prepared; feel like we’re well coached.”

How well the Cardinals are prepared remains to be seen until Saturday. First-year coach Eric Morris, who was Texas Tech’s offensive coordinator the last five seasons, takes over a program that went 1-10 last year (1-11 if you go by their weekly release).

UIW, which had an influx of 30 transfers in the offseason, is expected to run the Texas Tech Air Raid offense. On defense, the Cardinals are expected to be a four-man front that will utilize bear or double-eagle looks to pressure the quarterback.

Morris told Sports2Nite TV that his biggest concern entering Saturday’s game is how well his team will react to adversity.

“It’s been such a positive environment since I’ve gotten here,” he said. “It’s been a lot of hoopla, rah-rah, everybody’s happy and on the same page. When something goes bad, just to look in their eyes and make sure we get up and we go at it again, that we don’t take that and let it happen again.”

Davie took that not-let-it-happen-again philosophy to heart in the offseason. When UNM failed to finish in the top 10 nationally in rushing for the first time in his tenure during the 2017 season, he decided to incorporate more common spread-option elements into his triple-option scheme.

He said Tuioti is a player that looks to pass first and run second, which should pump life into the passing attack. But Davie also is anxious to see how his wide receivers produce in a more passing-friendly attack.

“What’s Elijah Lilly gonna bring? What’s Jay Griffin gonna bring?” Davie asked, rhetorically. “Delane Hart, we’ve been waiting to get a scheme to give him a chance to get the ball more. Well, he’s going to have a chance to get it. That’s part of the excitement.”