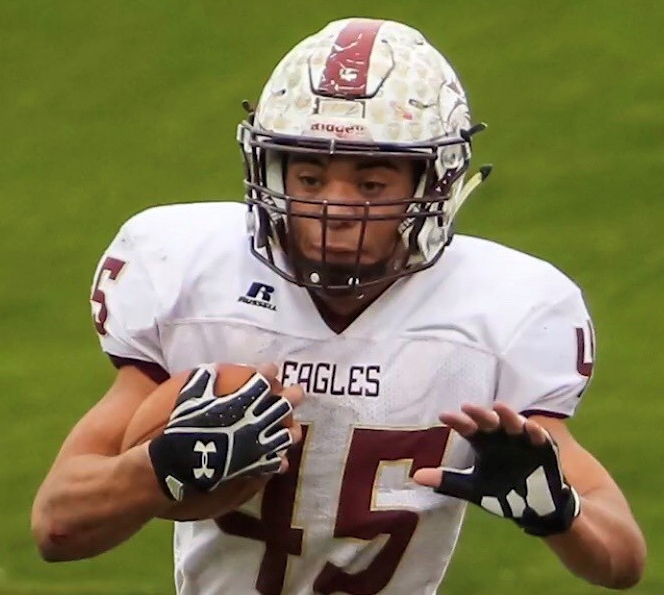 The 2018 New Mexico High School football season is in full swing, and Enchantment Sports, in conjunction with Proview Networks, is going to bring you all the latest news and views about the metro area players and coaches. Part of that is our

weekly feature The Galles Chevrolet Metro Player of the Week.

There were quite a few to choose from, as New Mexico is blessed with quite a few stout players, however, we can only choose one. This week it is:

Casillas led his Eagle teammates to a 40-21 victory over the Del Norte Knights, as Casillas did the most damage with his legs: 24 carries, 170 yards and a pair of TDs. I spoke with Belen head coach Greg Henington, who said, “It was a tough game for him. They really loaded the box and went-0 coverage the whole time. They really focused on stopping him, but he was really patient with his carries, and we just kept pounding and pounding.”

Del Norte, like most teams last year and this year, will continue to load the box (bring up their safeties) and crowd the line, so it isn’t something that Belen and Casillas won’t be used to, nor something that will discourage Casillas.

“It takes a lot of patience, which he is fine with,” Henington said, “and he isn’t a selfish guy at all, so he is good with us taking some shots up top to try and loosen up that box.”

That is exactly what Belen did as quarterback Luke Aragon took advantage of DNHS’ defense putting up 353 yards and four touchdowns of his own, including a strike to Casillas (three receptions, 46 yards, one TD). Henington says, “He (Casillas) caught the ball out of the backfield as well. It is something that he has been improving, trying to be a receiving threat.”

Casillas, like most players, also plays defense, posting four solo tackles from his outside linebacker position. As the season rolls on for the Belen Eagles, look for Casillas to improve.

“I know Diego is looking forward to taking his game to a different level and making second-level cuts and big plays to the house,” says Henington.

The Metro Player of the Week feature is brought to you by Enchantment Sports and ProView Networks, and sponsored by Galles Chevrolet. Each week, we will feature a top-notch athlete from the area. Anyone wishing to nominate a candidate, please include statistics and send to EnchantmentSportsNM@gmail.com.