Brian Urlacher is too nice a guy. Off the football field, anyway.

A member of the 2018 class of the Pro Football Hall of Fame, Urlacher was in Albuquerque this week for the third annual Brian Urlacher Banquet and Golf Tournament sponsored by ESPN Radio, 101.7 FM The Team.

Both at the pre-tournament banquet on Wednesday and after Thursday’s golf outing, Urlacher was asked about his Hall of Fame induction speech on Aug. 4.

If Urlacher fans in New Mexico – especially Lovington and Albuquerque – were disappointed that Urlacher did not regale the Hall of Fame audience about his hometown, high school or college alma maters, the former Lovington Wildcat, New Mexico Lobo and Chicago Bear asserts his frustration was worse.

Hall of Fame officials “told us we had 15 minutes (for their induction speeches),” Urlacher said in an interview with Enchantment Sports. “In years past, I’ve seen guys go 35, 45 minutes. They give you that time frame every year, but guys go over it.

“I was trying to be respectful of the people behind me, which I was,” Urlacher said, noting his speech took 17 ½ minutes.

By way of comparison, fellow inductee and Baltimore Ravens middle linebacker Ray Lewis was on stage for more than 34 minutes.

The response is the quintessential Urlacher. During a ceremony in which he had every right to make it all about himself, he was a team player. The eight-time Pro Bowler talked at length about his family and his Bears teammates and then made sure his fellow inductees that followed had their time to speak.

What a nice guy.

For an athlete of Urlacher’s magnitude, his approach may seem unusual. To those who have known Url prior to his NFL stardom, he’s the same Brian they’ve always known and loved.

ESPN 101.7 The Team President Joe O’Neill said he wasn’t sure the third annual golf event (the proceeds of which benefit The Salvation Army) was even going to happen. The previous two events were in June of 2016 and July of 2017.

O’Neill said he knew Urlacher’s Hall of Fame Induction was going to make for a busy summer for the ex-Bears middle linebacker and tried to be mindful of that in talking to Urlacher about a possible 2018 event.

“We went in tentatively knowing how he was going to be pulled in a lot of directions, and we left the door open for him to take this year off,” O’Neill said of the 2005 NFL Defensive Player of the Year. “He quickly said no, he wasn’t going to do that. The tournament would just have to be a little later. That meant a lot to me and a lot to our radio station.”

“He made every group seem like they were the only group on the course,” O’Neill said. “He was ribbing them; they were ribbing him. Everyone had a great time. He is so incredibly nice and patient. I’ve never been as close to a high-profile athlete, but in instances that I’ve had some exposure, the way Brian interacted, it’s very unique. Not everyone commits 100 percent to you. Some will give you some attention; some may disappoint you. But that’s not Brian.”

Urlacher’s team-first mentality allows him to interact with a golf foursome as easily as his fellow Pro Football Hall of Famers.

He said the highlight of his induction weekend was the Ray Nitschke Luncheon on Thursday that was exclusive to “the gold jackets,” as Urlacher stated.

“That was really cool. It was just us in there, and a lot of guys get up and speak and kind of give a state of the Hall address,” he said. “Joe Namath got up and spoke, Michael Irvin said some things. (Warren) Sapp got up. Cris Carter. About 10-15 guys stood up and said some things.”

But of all the speakers, Namath had him at “hello.” 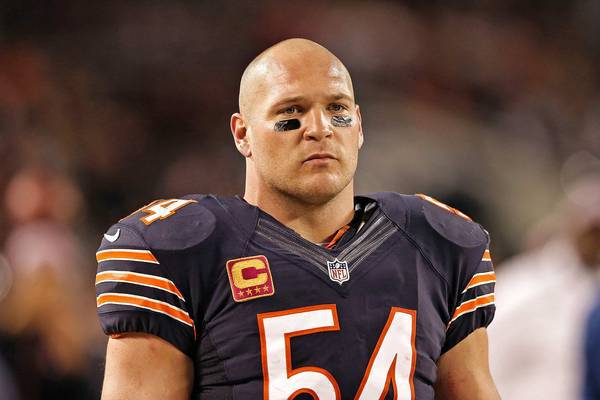 With the induction behind him, Urlacher says life is slowing down a bit for him. He has no immediate plans to throw himself back into the workforce. His priority is his family – his wife Jennipher, daughters Pamela and Riley, and son Kennedy.

Urlacher says he stepped away from a year in the broadcast booth because the time commitment was taking away family time.

“I’m enjoying my life right now,” he said. “My kids are 17, 13 and 12, so I stay busy with that. I want to stay available for them. I take the kids from practice to practice a bunch. I don’t have anything to do. School is when I get all my stuff done, and when school gets out, we do our thing.”

Which is what nice guys tend to do.